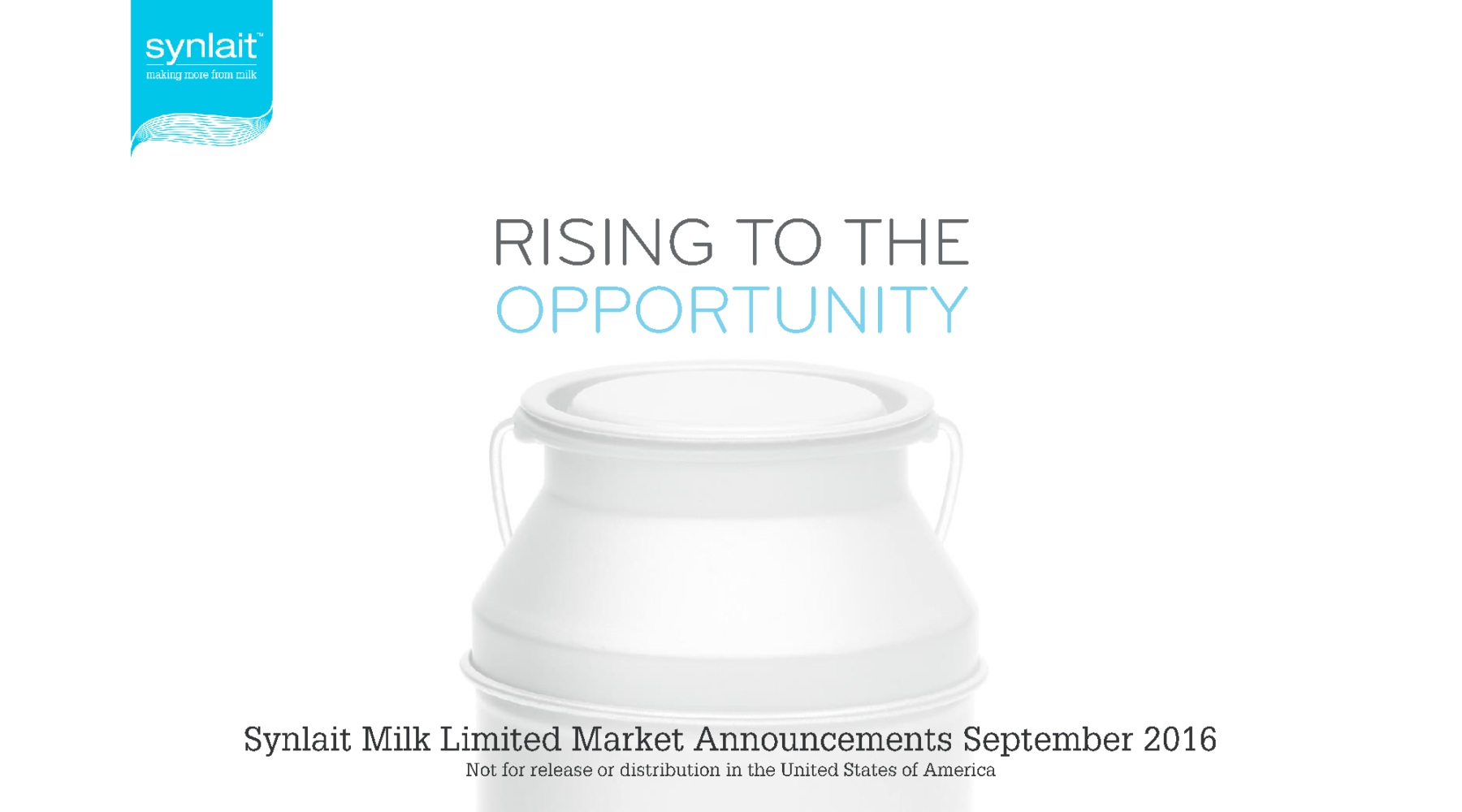 Synlait’s reported net profit after tax (NPAT) has more than tripled to $34.4 million for the financial year ending 31 July 2016.

Driven by an almost fourfold increase in canned infant formula volumes and growth in powder and cream product volumes, the positive result has also set the foundation for Synlait’s next phase of growth.

“Synlait is a growth company. Our FY16 performance highlights the progress we’ve made since our IPO in 2013 towards our aspiration of making more from milk,” said Chairman Graeme Milne.

“We are continuing this momentum with an accelerated pro-rata entitlement offer to eligible share holders1 to raise approximately $98 million in support of our next growth phase. Investing in further capital projects to expand our capability  and capacity will put us in a strong position to pursue customer, product  and  market  development opportunities in the coming years,” said Mr Milne.

$213.9 million. As a result, our leverage ratio has improved to 2.5x,” said Managing Director and CEO John Penno.

“Our record profit is a clear highlight for FY16, but throughout the year we also invested in improving our business, developing customer partnerships, supporting our milk suppliers and reaffirming our commitment to becoming a world leader in infant formula,” said Mr Penno.

Synlait continues to work with four of the world’s five largest infant formula  companies. A long-term agreement with The a2 Milk Company™ announced  in August 2016 provided certainty around the supply of a2 Platinum® infant formula over the next five years.

“Canned infant formula is a value added product and generates a strong margin, which improves our product mix and overall gross profit per metric tonne (MT). As a result, our gross profit per MT increased 51% from $567 / MT last year to $859 /MT,”  said Mr Penno.

“We are working through our strategy with infant formula customers exporting into China, including The a2 Milk Company™ and Munchkin Inc.”

“It’s likely the Chinese regulations will moderate canned infant formula growth in FY17 as the market deals with the changing landscape, but we expect the market to normalise in the longer term,” said Mr Penno.

Synlait has revised their 2016 / 2017 forecast milk price up from $4.50 kgMS to $5.00 kgMS following recent, albeit modest, improvements in dairy commodity prices.

“We’re very aware on-going low dairy commodity prices in FY16 impacted our Canterbury-based milk suppliers. For the second consecutive year our milk price is below the breakeven price for most of our milk suppliers, but our updated forecast of $5.00 kgMS for the current 2016 / 2017 season is encouraging,” said Mr Penno.

“Our response to date has been to support our suppliers with higher than normal advanced payments, which we are able to do given our strong operating cash flow in

Mr Milne believes Synlait has positioned itself well internationally as a trusted and innovative dairy manufacturer.

“We are looking at investing approximately $300 million in capital growth projects over the next three years to solidify this position and continue  pursuing  profitable opportunities to make more from milk,” said Mr Milne.

The rights issue to shareholders is expected to raise approximately $98 million of new equity by mid-October 2016 and it will be used for a mix of debt repayment and funding capital growth projects.

Synlait has also announced plans to start the process to dual list on the Australian Securities Exchange (ASX) and expects to commence trading on the ASX before the end of 2016.

“Interest from investors in Australia has grown in the past few years and dual listing on both the NZX and ASX will allow institutional and retail investors on both sides of the Tasman to be a part of our journey,” said Mr Penno.